„This meeting of paint and sculpture culminated in Transport (2004), a full-size rowboat that sat on wood 4-by-4s in the middle of the rear gallery. Painted a spotless white, the boat had been filled with a cadmium yellow epoxy resin which slopped over the gunwales at mid-ship. As is the case with all of Werner's work, Transport is at once literal, formal, poetic, sensuous and intelligent.“

Mike Weiss Gallery is pleased to announce Ballet, an exhibition of new work by German artist Guenter A. Werner.

Werner's luminescent, epoxy filled works are painterly sites that trigger multiple formal and conceptual connotations.  Though sculptural in appearance, the monochrome surfaces that he pours in glowing colors onto fabric and into bottles, buckets and tubes are more closely associated with painting. Instead of using canvas as his primary paint support, Werner opts for more unconventional materials.  His rectangular Frames consist of multiple layers of epoxy dispensed over translucent polyester fabric.  Contrasting bands of opaque color gradually fade from either end into a white center, creating an overall effect of weightlessness and transparency. Through the Frames Werner reveals his longstanding preoccupation with the idea of an abstract painting as a three-dimensional object.

In Tube, the artist considers the act of drawing by using a clear plastic tube as a conduit for his paint.  The viscous fluid is funneled to form coiled lines of color that are then suspended in delicate loops. This graceful interaction between paint and surface is also evident in Circle, a work in which buckets filled with radiant colors dangle precariously from the wall, slightly angled so that the paint could spill out at any moment.  With an acute sense of balance and composition, Werner produces deft combinations of color and material that are at once literal, formal and poetic.

This is Guenter A. Werner's second exhibition at Mike Weiss Gallery.  The artist has exhibited widely throughout Germany and Poland and is represented in Europe by Galerie Hafemann in Wiesbaden, Germany.  Werner lives and works near Frankfurt, Germany. 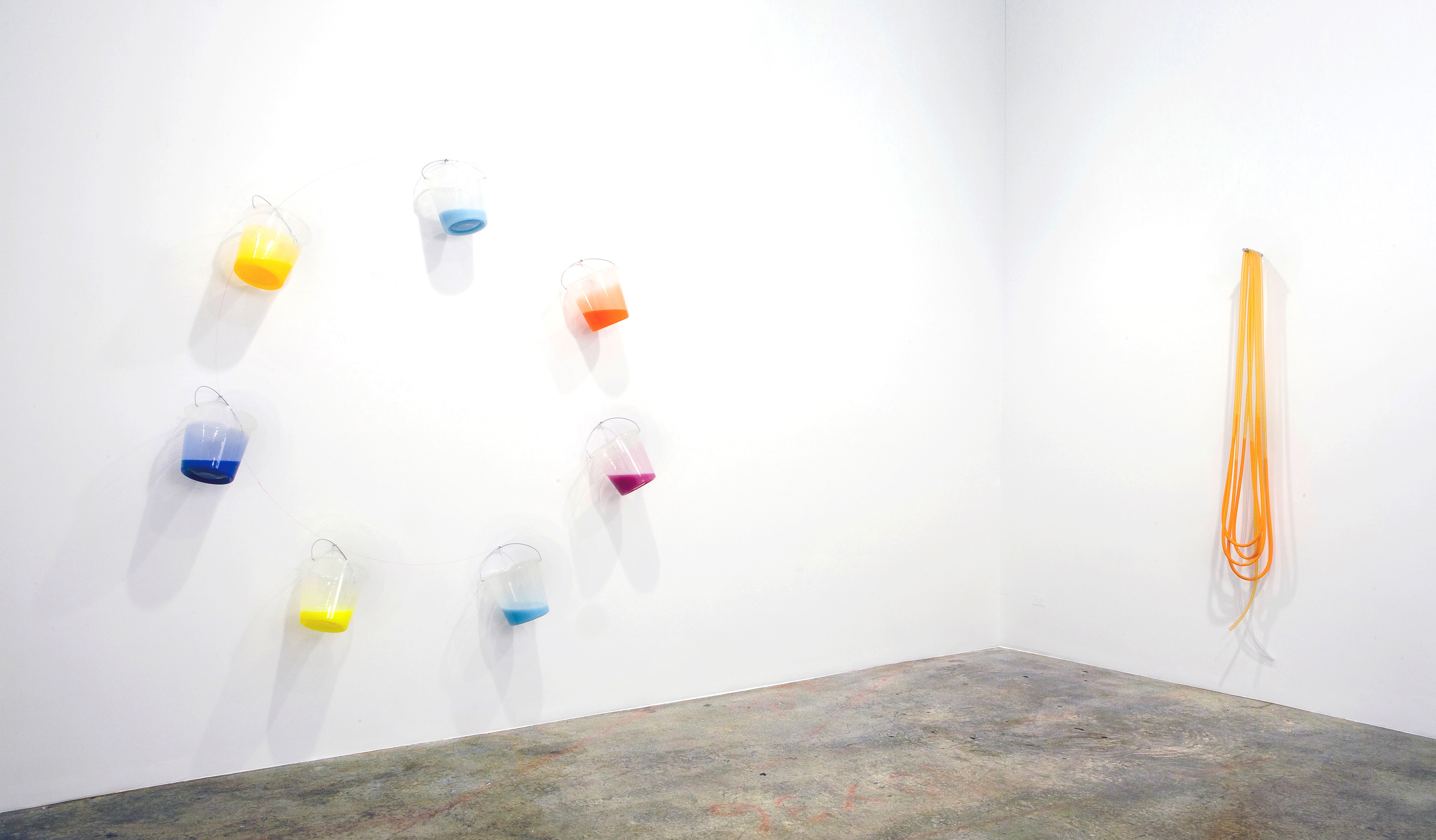 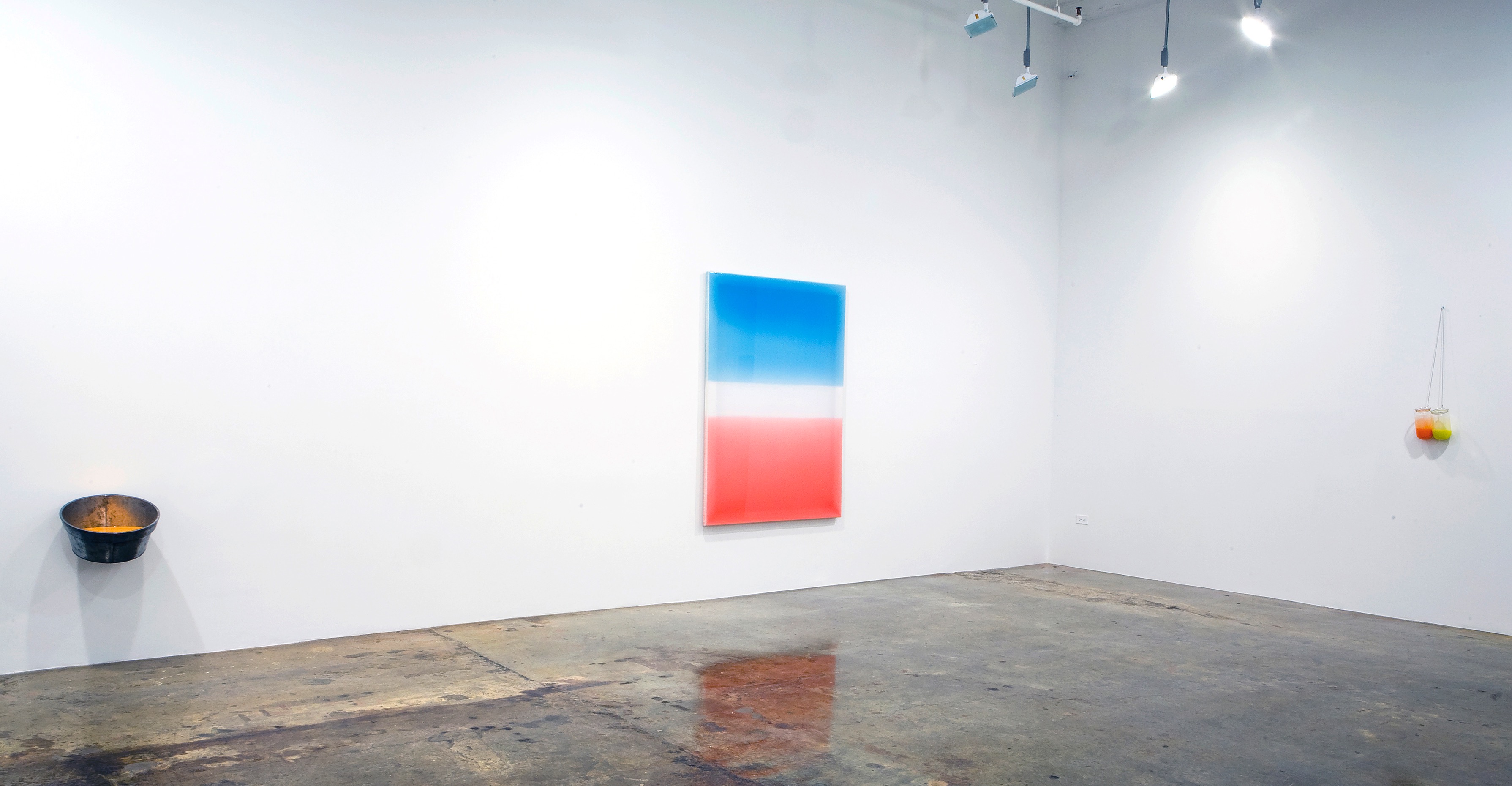 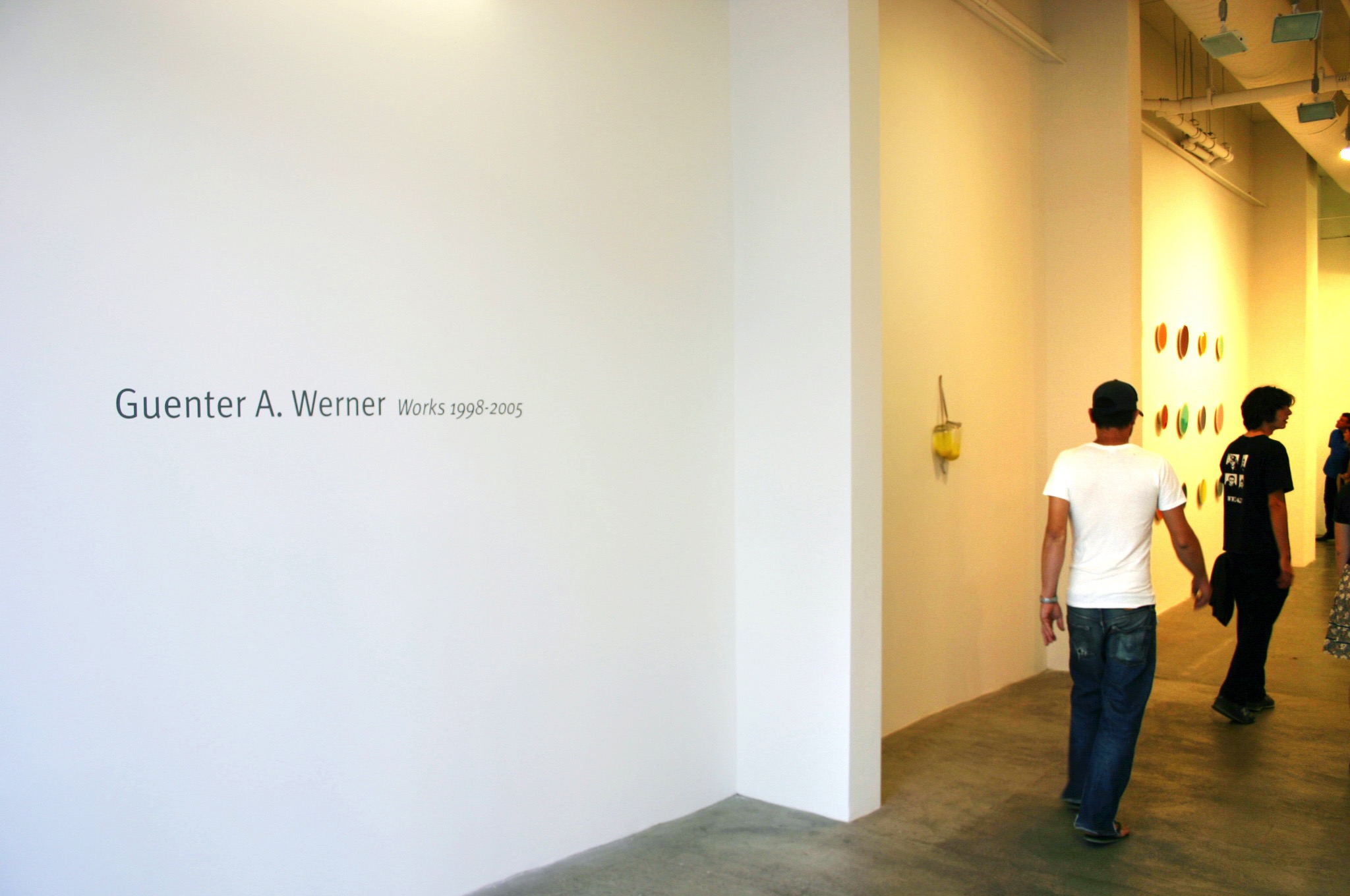 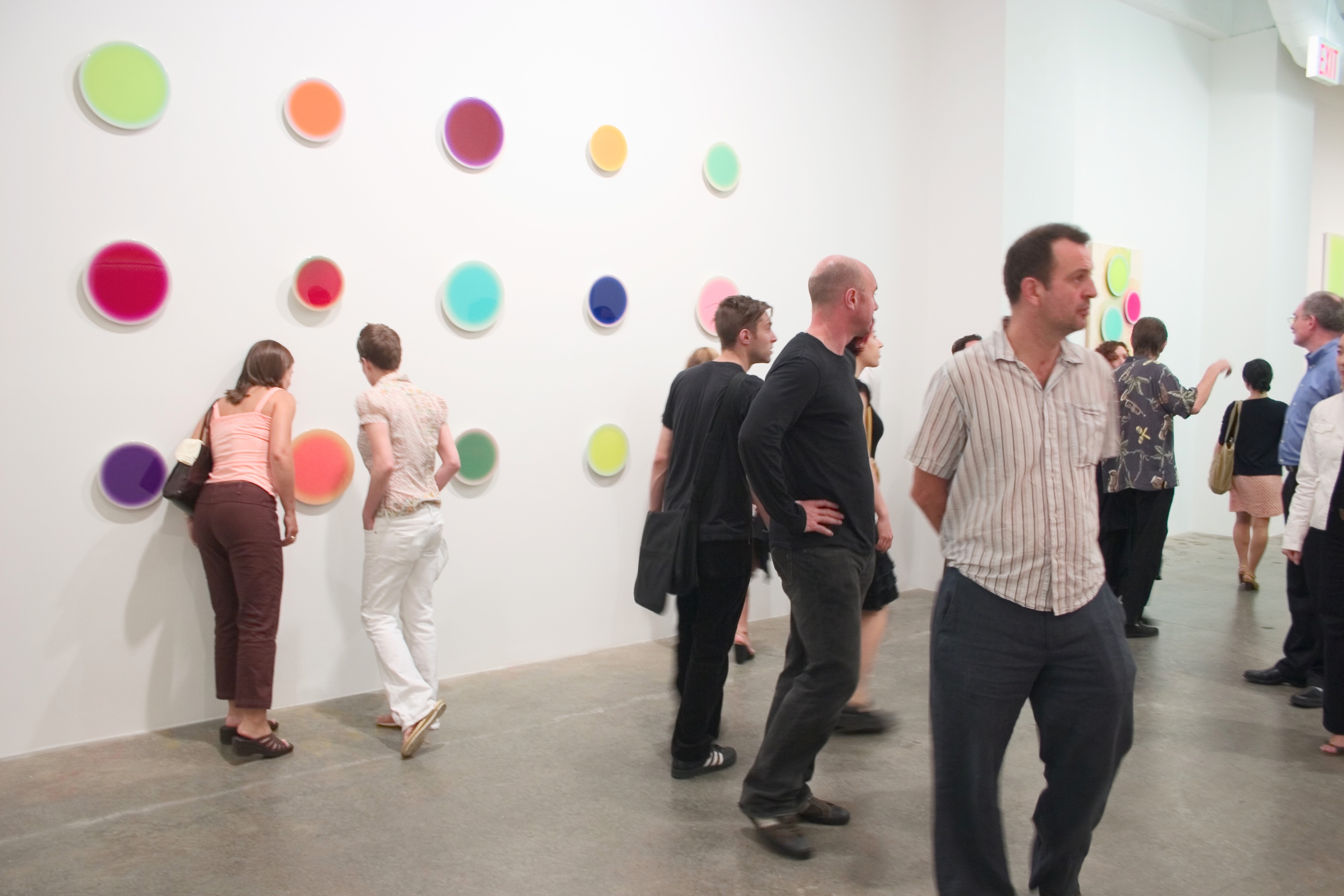 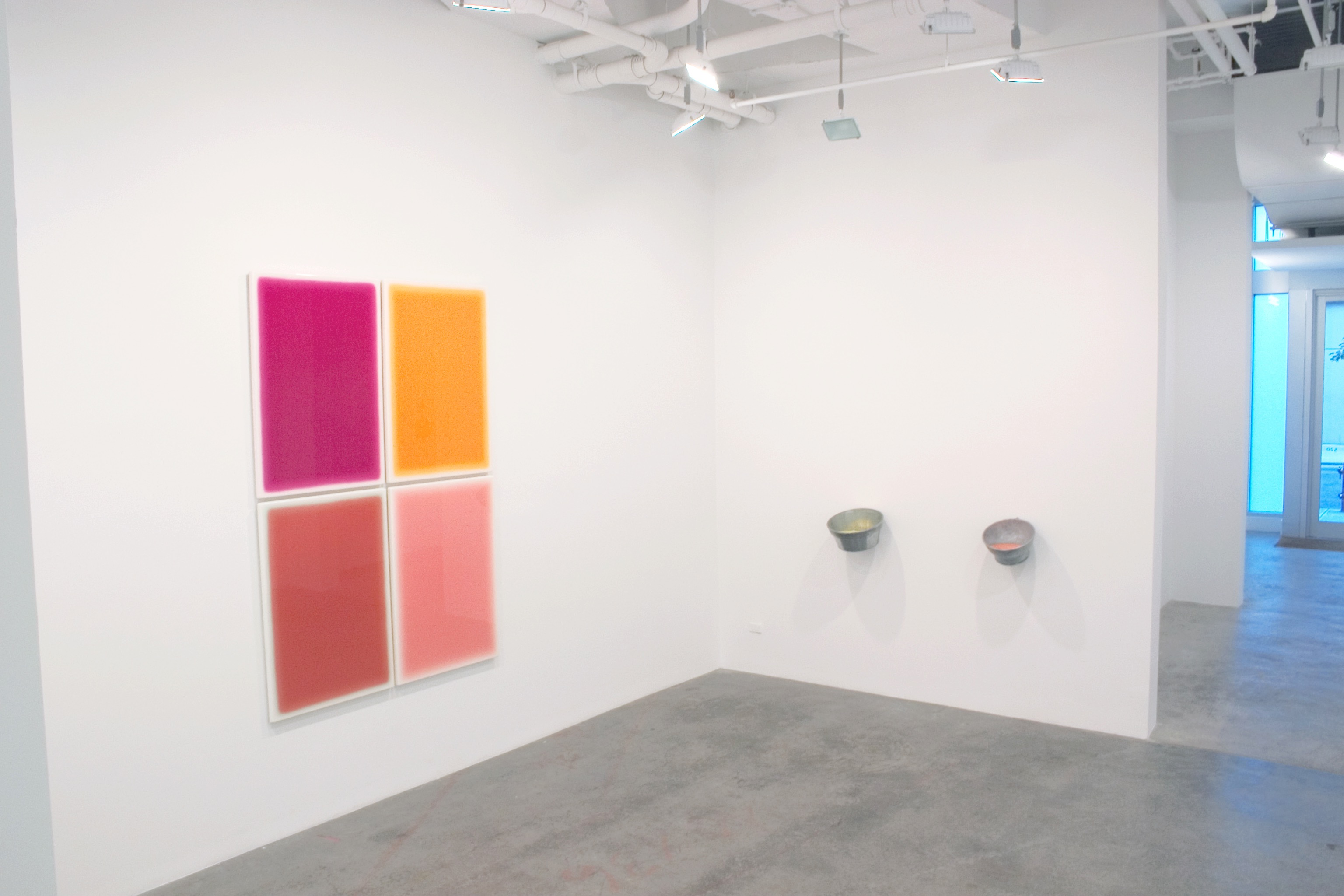 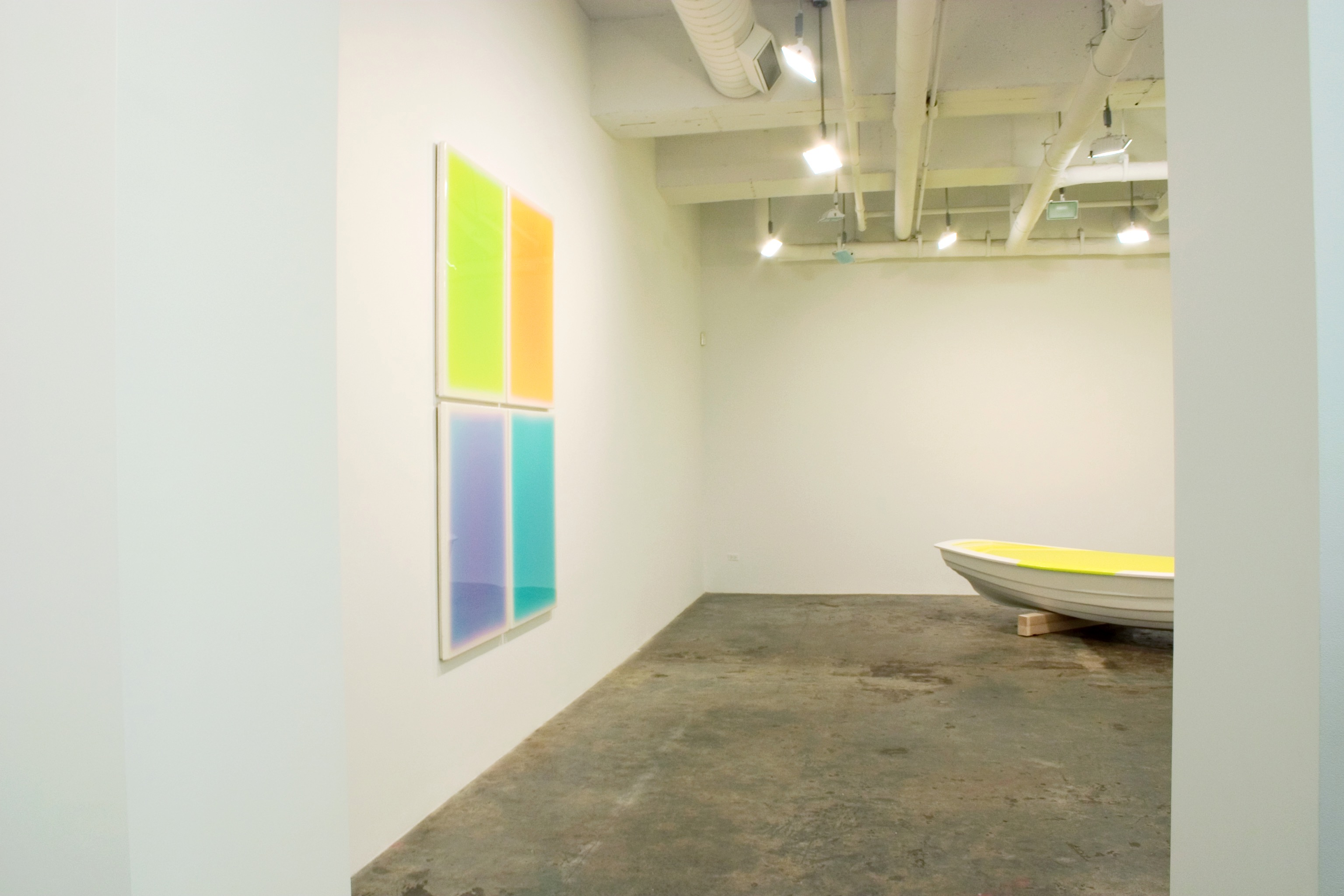 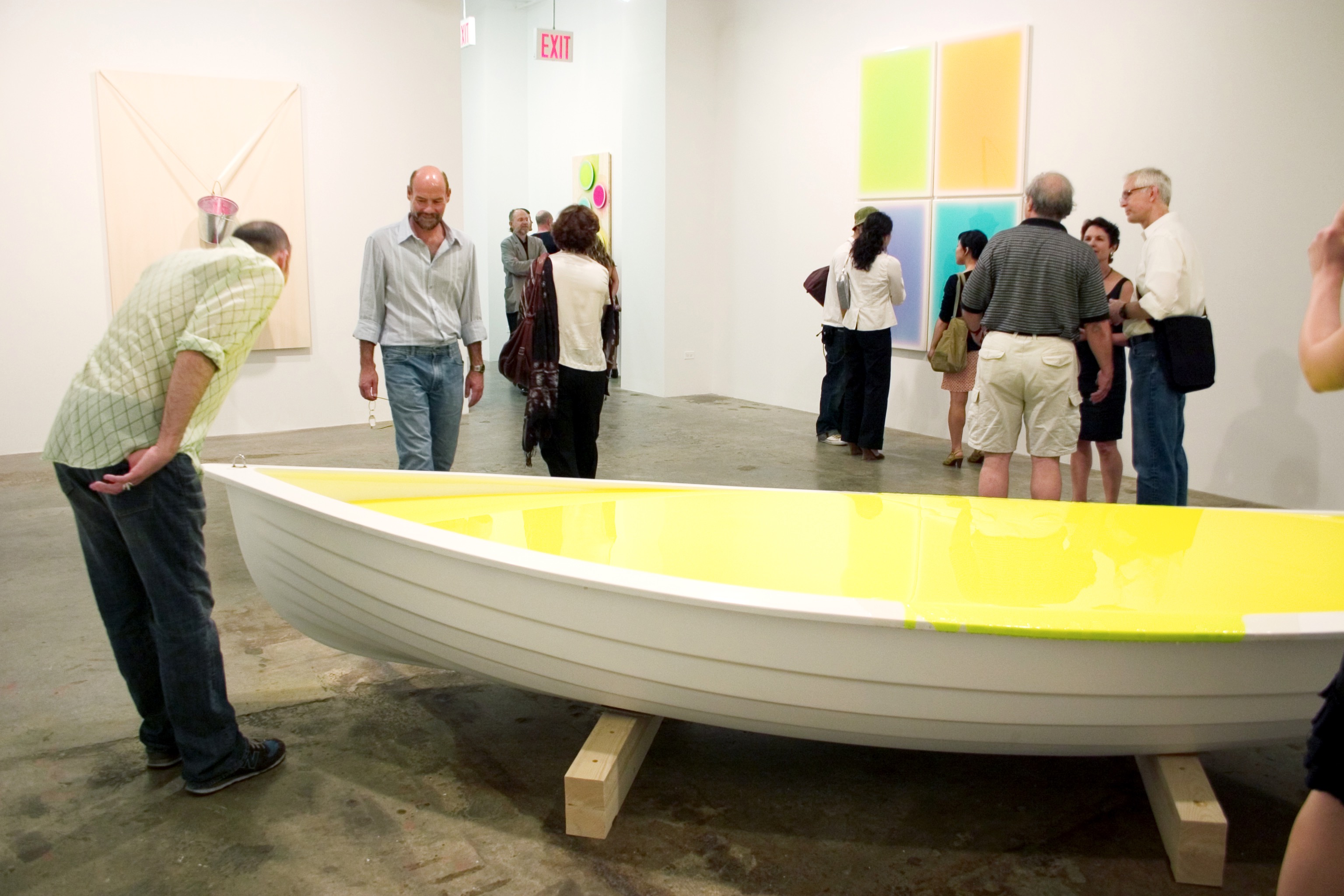 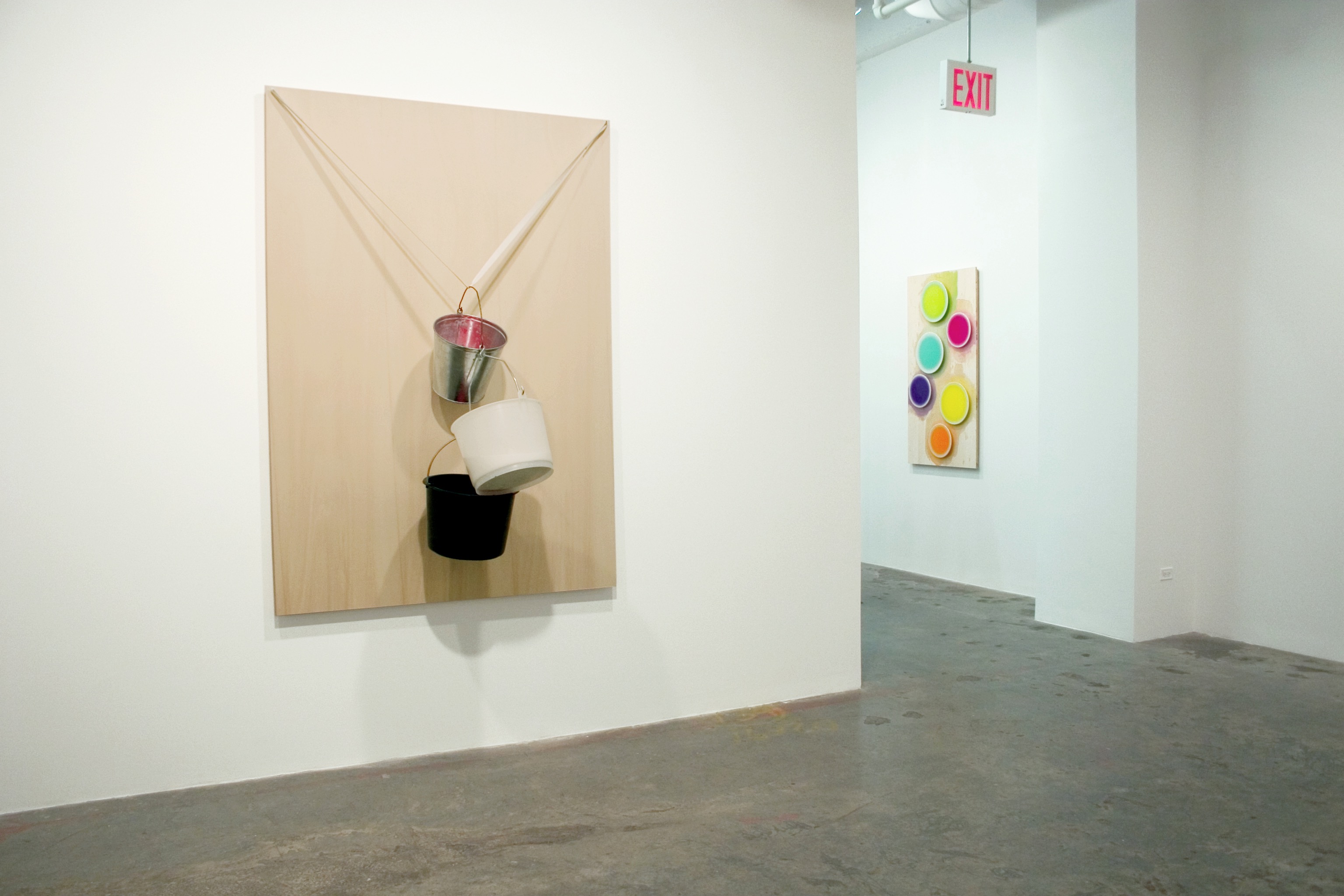 In his first New York exhibition, Frankfurt artist Guenter A. Werner showed selections from several continuing bodies of work that play with the history of abstract painting. Experimenting with surfaces and containers, Werner uses color as both material and subject matter. In doing so, he produced some imaginatively romantic objects.

Werner`s "Screen" series (2005) features monochromes on highgloss plastic that completely erase any trace of painterly gesture. Screen 5 is a single lime-green rectangle, while Screen 3 and Screen 4 each comprise four panels of bright solid hues hung in square, as if they were windows offering a view of colors. A group of 15 tondo paintings on porcelain and wood, each of them a single polished jewel tone, was arranged in a grid; the structure here was reminiscent of Ellsworth Kelly`s Colors for a Large Wall (1951), while the circular elements recalled Robert Delaunay`s color experiments of the first decade of the 20th century.

Werner`s "Bandage" series brought color off the wall and shifted the focus from surface to substance. Bandage 30 (1998-2003) and Bandage 39 (2001-5) were clusters of paint jars and cans belted together and hung with their openings facing the viewer. Each container retained the color of the paint that originally filled it, and despite the loss of volume, the intensity of the pigment remained. The color, referring to nothing but itself, is, in the words of Frank Stella, "as good as it is in the can". In these works, Werner displaced that modernist locus of contemplation and transcendence, the monochrome, from the canvas onto a ready-made object.

The poetic absurdity of his project culminated in Transport (2003-4), a small white rowboat filled with yellow paint the color of a street sign, accompanied by a photograph of the same boat floating in a calm stream in a lush green landscape.

Guenter A. Werner at Mike Weiss

German artist Guenter A. Werner makes assemblages that readily call to mind Donald Judd`s definition of the "specific object" as combining the best qualities of painting and sculpture. Upon entering "Works 1998-2005", Werner`s first exhibition in the U.S., viewers immediately encountered Collector 1 (2005), a wall piece that consists of two large, clear glass beakers, each partially filled with an acidy yellow epoxy resin paint. The jars are linked together by a length of narrow belting and left to dangle in relative balance from a nail.

While the physicality of such works would seemingly make them sculpture, Werner`s use of color and frntality obviously references painting. His concerns are further elaborated in two pieces from the "Bandage" series (1998-2002), which involve variously sized cans and glass jars partially filled with a rough mixture of gelatinous silicone that has been mixed with different pigments. Strapped together, the containers hung on the wall at eye level, with their open tops facing the viewer.

Although Werner`s jars, cans, silicone and epoxy are rife with art-historical associations ranging from Duchamp to Post-Minimalism, the artist does not linger over these. He seems more interested in how his formalist esthetic connects to the everyday world. To make the 15 disks of radiant color that hung in a grid on a wall, the artist poured paint into white pocelain dinner and salad plates. The luminious greens, glistening reds, glowing yellows and shimmering blues on the plates have plasticlike surfaces. Because of the nature of the epoxy resin paint Werner uses, the color that fills each plate is transparent at the plate`s lip where it is thinnest, and opaque at its center where it is the thickest, causing the color to appear to hover in the middle of the plates.

If, for Werner, painting is frontal and occupies wall space, then sculpture is something you look down into. Tondo 6 (2002) is a galvanized washtub filled with hot pink epoxy paint and propped against the wall. Its contents look as if they were about to spill out. A similar tub cantilevered off the wall at waist height, Tondo 8 (2002), contains cadmium yellow. This meeting of paint and sculpture culminated in Transport (2004), a full-size rowboat that sat on wood 4-by-4s in the middle of the rear gallery. Painted a spotless white, the boat had been filled with a cadmium yellow epoxy resin paint which slopped over the gunwales at mid-ship. As is the case with all of Werner`s work, Transport is at once literal, formal, poetic, sensuous and intelligent.

It is beyond our power, as human beings to completely harness forces that while maintaining life, have the power to destroy it. We rely on its bounty and marvel in its constant regeneration, a veritable intimation of divine presence. These are forces that fuse together all living beings, all attempting to live in harmony in an ever transforming environment with sometimes deadly forces that have the power to inspire complete awe and tremendous fear.

The true majesty of this energy is ever present, proving itself time and time again, even to those that are lacking the sensibility of seeking it out. From the wave that carries with it a myriad of colors and forms, gently and creatively placing and displacing just the right elements through its journey, to the Tsunami that forcefully enters, becoming a disruptive and deadly force for our only budding civilization. It is indisputable that traces are always left behind, marvelous and ever intriguing despite the ill-fated human tragedies. It then comes as no surprise that such a group of revered artists are continuously stimulated by what have collectively come to be known as the forces of nature, and produce works inspired by this supreme influence. 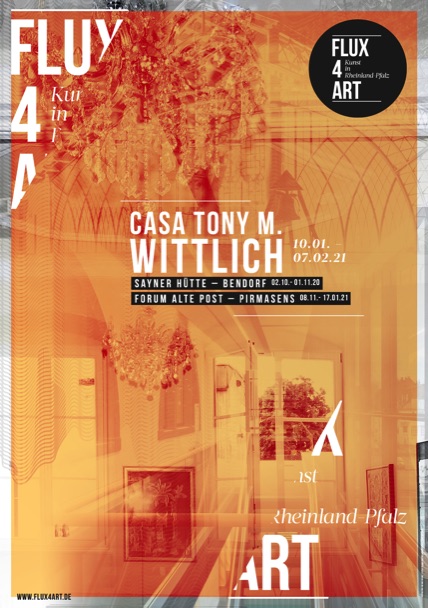